The Countries in the World Most Sceptical About 5G

Interested in finding out where the most sceptical people live in regard to 5G, Prolifics Testing conducted thorough research into the online searches surrounding the topic within different countries.

5G seems to be coming to every town and city at a very fast rate, but with this rapid growth comes worries and misunderstandings for some individuals. Interested in finding out which countries in the world are most sceptical about 5G, Prolifics Testing conducted thorough research into the online searches surrounding the topic within different countries.

To find out the area most suspicious or confused about 5G, we analysed online search data from Ahrefs and found the most common search terms are: ‘Is 5G Dangerous?’, ‘Does 5G have health risks?’, and even ‘Does 5G spread coronavirus?’, despite WHO carrying out extensive research and concluding no adverse health effects had been established.

We then used Ahrefs to discover how many times each question was searched on average each month in different areas to deduce which country is the most sceptical or curious about the new technology.

The Countries Most Suspicious about 5G 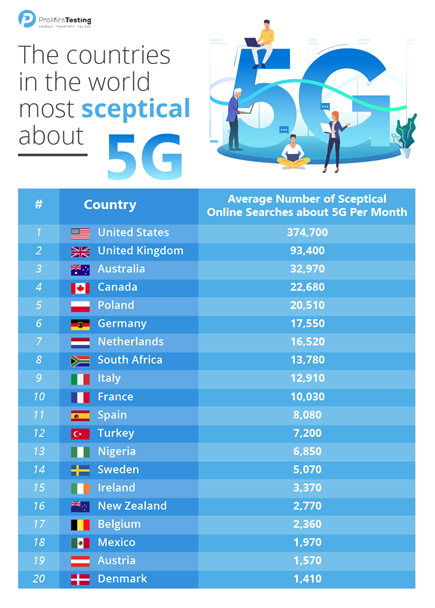 With many companies integrating 5G into their development process, it’s safe to say that this telecommunications technology is here to stay. Let’s take a look at which countries are most dubious about this advancement...

Coming in at number one in our rankings of the countries who are most sceptical about 5G is the United States, with a staggering 374,700 searches per month. This is four times more than the United Kingdom which takes second place, where natives searched for questions like ‘Is 5G safe?’ 93,400 times per month. Perhaps this steep drop can be down to the BBC calming some of the citizen’s fears.

Sitting at number three is Australia with residents questioning the implications of 5G 32,970 times a month, on average. Spots four, five and six go to Canada, Poland and Germany, with each country researching 5G 22,680, 20,510 and 17,550 times, respectively. The Netherlands is hot on the heels of Germany, taking seventh place, as 16,520 incidences of residents searching the effects of 5G are recorded each month, on average.

In 20th place is Denmark, with the Nordic country making just 1,410 searches on average each month regarding 5G. Residents in Austria and Mexico don’t seem too worried about 5G either, with just 1,570 and 1,970 searches asking questions about 5G.

Which Countries Search for ‘5G’ the Most? 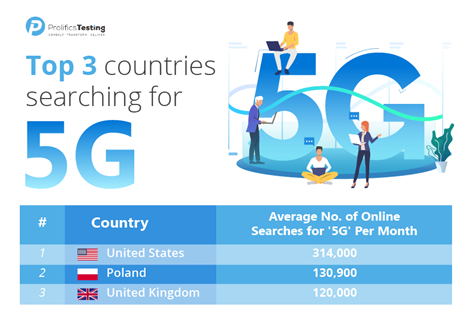 Taking our analysis of searches even further, we looked at the countries simply searching for the word ‘5G’ on Google. We suspect users searching for this term will either be finding out more about the technology, learning about the benefits, or generally researching potential risks as a result of misinformation spread online.

In third place is the United Kingdom, as UK nationals Google ‘5G’ 120,000 times per month, on average. Not as high as the USA, but still conveying an interest in wireless technology. 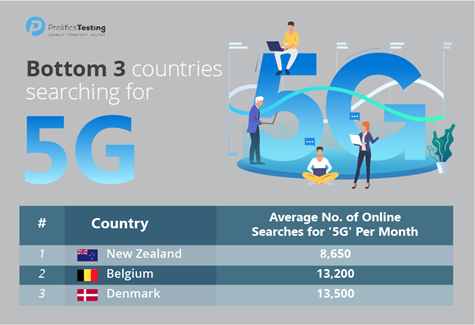 New Zealand residents make just 8,650 searches per month on average - 305,350 less searches than the US in first place! Belgium places in second (but still quite a jump from New Zealand), as Belgians search for ‘5G’ 13,200 times on average per month.

Which Countries Ask ‘What is 5G?’ Most?

Whereas the search term ‘5G’ could be interpreted in a number of ways, the question ‘what is 5G?’ shows a pretty clear intent: to find out exactly what the technology is.

Unsurprisingly, the United States comesup trumps again, as the country searches ‘what is 5G?’ 127,400 times per month, on average.

Another regular visitor to the top three is the United Kingdom, which places in second. Our analysis found 'What is 5G?' is typed into Google 24,200 times on average each month. That's a sizable decrease from the US - 103,200 less searches, in fact. 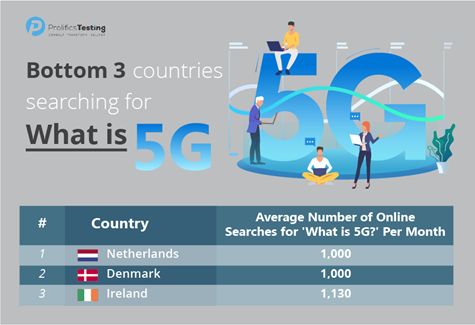 The countries that are not so bothered about questioning what 5G is and how it works are the Netherlands and Denmark are tied. With equal searches, these two Nordic countries searched ‘what is 5G?’ 1,000 times per month on average.

Ireland made 130 more searches than the Netherlands and Denmark, as residents make an average of 1,140 searches a month on Google. This could either indicate that Irish citizens already know the answer, or are not as suspicious of 5G as other countries when it comes to the effects of the technology.

1. Interested in 5G, Prolifics Testing utilised online analytics tool Ahrefs to discover which countries in the world are most sceptical about 5G.

2. To achieve this, Prolifics Testing analysed general online search data from Ahrefs to establish the sceptical online searches internet users are most making about 5G and found these to be the most common ones:

Once the most common sceptical online searches in relation to 5G were found, Prolifics Testing utilised Ahrefs ‘keyword explorer tool’ for Google and found out how many times on average per month each sceptical 5G question was searched online in each of the countries analysed in the research. The search volumes for each of the identified top sceptical 5G questions were then added together to represent the overall monthly average sceptical online searches made about 5G in each of the respective countries reviewed.

3. When analysing the data, each of the most common sceptical 5G online searches were evaluated in English as well as each country’s respective primary language (where applicable) to increase the reliability of results.

5. From the Ahrefs database, 155 countries from across six continents were individually assessed for the sceptical 5G online searches research.