The Most In-Demand Technology Jobs

It is undeniable that technology has become an integral part of our lives. In fact, both individuals and organisations have grown heavily reliant on the technical tools of today. Yet behind every interface are the hours of expertise and work that goes into making the technology we use efficient, trustworthy and user-friendly. As technology continues to develop and more innovations are brought to the table, the demand for those with the appropriate technical skills to make these complex ideas a reality will only increase.

The Most In-Demand Technology Roles In Europe 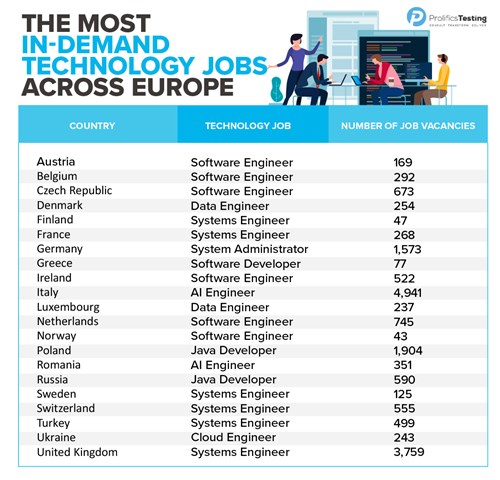 The greatest demand for any technology job across Europe was the role of an AI Engineer in Italy, with a remarkable 4,941 job vacancies. Although it was also the most in-demand job in Romania, there were 14 times less vacancies available there, with 351.

The United Kingdom was home to the second most in-demand role across Europe, with our data finding 3,759 vacancies for the role of a Systems Engineer.

In fact, the need for Systems Engineers appeared rife across Europe, since it was the most in demand role across six European countries. Despite having only a small fraction of the job vacancies available in the UK, the role of a systems engineer proved to be the most in-demand technology job in the following countries also:

Poland had the third greatest demand for any technology role in Europe, boasting a significant 1,904 job vacancies for the role of a Java Developer. Despite having 1,314 less job vacancies, Java Developers were also the most sought after in Russia, with 590 vacancies up for grabs!

System Administrators in Germany are also in luck, since we found that this role is the fourth most in-demand technology job across Europe, with Germany offering its inhabitants an impressive 1,573 vacancies. In fact, the demand for the role of System Administrators was specific and exclusive to Germany, since it didn’t appear to be the most in demand technology role in any other European country.

Rather, most European countries most sought after candidates to fill the role of Software Engineers, with data revealing this to be the most in demand technology job across six countries. The number of vacancies for Software Engineers made candidates for this profession most sought after in Austria, The Netherlands, Belgium, Czech Republic, Ireland and Norway. However, the greatest number of vacancies for this role can be found in The Netherlands.

The Technology Jobs Most Sought After By Brits 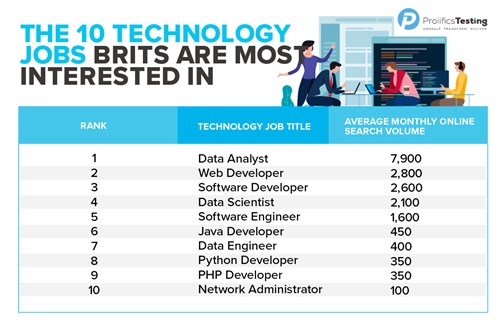 But with masses of vacancies, which titles do candidates want the most? Prolifics Testing analysed Google Search volume data to predict which 10 technology jobs Brits were most interested in.

Our findings revealed that the most sought after technology role amongst Brits was in Data Analysis, with ‘Data Analyst Jobs’ searched 7,900 times on average, every month! In fact, the title of a Data Analyst proved most popular by far, with at least 5,100 more monthly searches than any other technology role.

Meanwhile, Web Developers were the second most sought after job in the UK, accumulating an impressive average of 2,800 monthly searches. Shortly behind and placing third was the role of a Software Developer, with an average monthly search volume of 2,600 searches.

The data also revealed that Developer jobs of all varieties were the most searched for roles amongst Brits, with Web, Java, Software, Python and PHP Developer roles all placing in the top 10 technology jobs Brits are most interested in. This means that half of the 10 most sought after technology roles in Britain involve becoming a Developer!

Interestingly, despite the UK being home to the largest quantity of vacancies for Systems Engineers, the title failed to score a place in the 10 technology roles most sought after by Brits, suggesting that these roles may be listed for some time before they are filled.

Which Programming Languages Are Brits Most Interested In Learning? 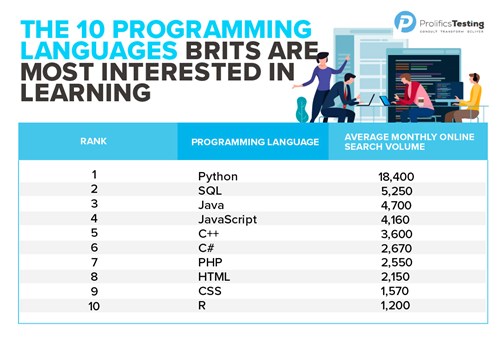 Owing to the marked interest in certain technology roles, Prolifics Testing were eager to find out how proactive Brits were in order to bag these roles. As a result, they discovered which 10 programming languages Brits were most keen to learn.

Of the 13 languages analysed, Python was the most popular programming language by far, with ‘Learning Python’ searched 18,400 times on average each month on Google!

Placing second with just over a quarter of the number of searches made for Python was SQL, with 5,250 search queries monthly. Meanwhile, Java and JavaScript scored third and fourth place, both with over 4000 monthly searches by those looking to learn.

Methodology For Most In-Demand Technology Role Per European Country:

Methodology for the 10 programming languages Brits are most interested in learning: