I recently attended the National Software Testing Conference at the British Museum in London, where Prolifics Testing was an exhibitor. As an organisation, we decided to attend this event for the first time because it is important to us to engage with delegates to understand their testing challenges and upcoming priorities, as well as gauge the direction of industry trends within testing. 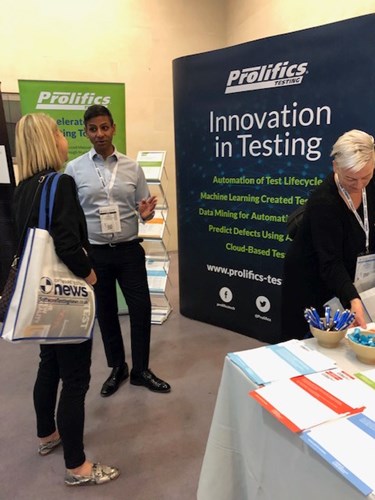 Before the event, I was excited about the kinds of topics that the event had sessions on, including testing around IoT, AI, blockchain, VR, and search-based software engineering to automatically design test cases. However, I wasn’t sure if this kind of thought leadership was what organisations in the UK were looking to implement at the moment.

The event was well-organised, with a mixture of hands-on testers, test managers, and Directors of Testing from all sectors and organisation sizes. After just the morning of the first day, the one thing that struck me was the number of organisations that were looking at implementing Test Automation but were being hindered on strategically rolling it out across the business.

A lot of organisations that had embraced agile, BDD, CI, and DevOps around web and cloud mobile apps had seemed to embrace test automation using Open Source technologies such as Cucumber, Selenium, Appium, and Jenkins. However, when it came to implementing test automation throughout the organisation from mainframes, desktop applications, and web and mobile apps, problems arose.

Additionally, I noticed that the move from traditional testers to more technical Software Development Engineers in Test (SDETs) was definitely on the rise, thus creating a problem: how can we empower our traditional test team members, who may have little or no coding experience, to embrace test automation?

How to Increase Test Automation Adoption? I remember when I first started in testing 17 years ago, when I saw my first demo of what was then Mercury Interactives WinRunner, I thought that it was a no-brainer for organisations to implement record and playback for regression testing, as the promised ROIs were astronomical.

However, the problems of hard-coded data and brittle scripts that required huge amounts of maintenance to keep them working meant that it was never going to deliver on the early promises.

And then Test Automation frameworks came along to save the day and overcome many of the shortcomings of record and playback by delivering Page Object model-based, data-driven, modular, and hybrid frameworks.

This did, in fact, resolve many of the shortcomings, but at the cost of thousands of lines of code, which required expensive developers to create and maintain. This had an implication on the time and costs involved in test automation projects. At Prolifics Testing, we have a radically different idea of test automation. We believe there are limited returns for just automating regression tests. Instead, we are strong advocates for automating every stage of the test lifecycle using cutting-edge concepts such as Machine Learning, Predictive Analytics, Data Mining, and Containerization.

We have developed free test Accelerators that enable our clients to implement automated manual test case generation, automated test data creation, and code-free and script-free test automation that enable manual testers, business analysts, and business users to use test automation and containerized performance testing to reduce the need for costly hardware. And, best of all, our Accelerators support CI/CD and DevOps.

To find out about the benefits of Test Automation, our Accelerators and more, please contact us for a no-obligation chat.