Event Takeaways - The Role of Testing within Successful Digital Transformations

On February 4, we partnered with the Business Transformation Network (BTN) to deliver an exclusive virtual roundtable with senior technology leaders. Here are some of the key takeaways from our discussion. 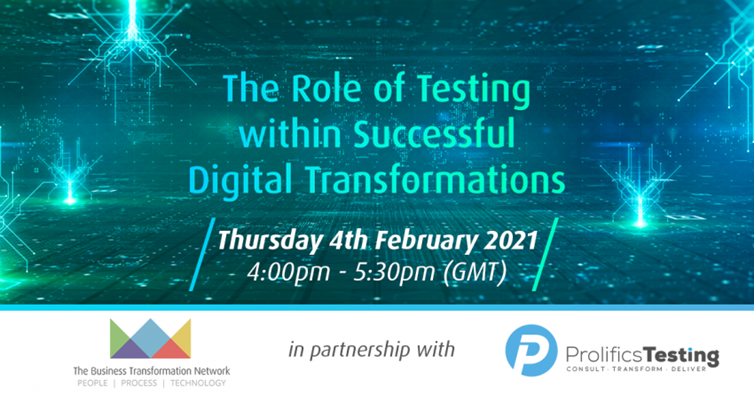 Optimise before you automate

At the top of the group's conversational points was the journey to delivering faster and more frequently, whilst ensuring quality was at the top of the agenda. There was a general consensus that there have been increased levels of pressure around the role of testing and the solution is automation. The role of automation in testing is an evolving discussion and one that can definitely qualify as a transformation due to the nature of it not having an ‘end goal’. To ensure continued success, the focus should be on optimising the number of tests you want to run before rolling out automated processes.

The conversation stemmed from getting the first step right before taking your team and organisation on the transformation. There was a passion to ensure we look at all aspects of the test process before trying to automate, rather than just looking at the functionality. One attendee spoke about how the quality of the coding has significantly improved by taking a step back to look at the optimum number of tests and scrutinising the business process models.

There may always be a role manual testing, can we actually automate everything? More importantly, do we want everything to be automated? The group discussed the blurred line that is regular dismissed between testing and checking and the transition from manual focused QA to automated focused QE (quality engineering). Not everyone will get on board and can see the true benefits of automation but if as an organisation we can support the individuals that have the desire to work with the evolving and revolutionary technologies, the benefits will be felt across the entire organisation.

Successful transformation is driven by incremental change rather than mass change, this should be mirrored with the evolution of your QA journey. Bringing fresh minds into your engineering teams can give a fresh approach to your automation journey. The tools/technology will always be the enabler for change and will undoubtedly be important but organisations need to ensure the right people are in place at the right time to ensure there are Quality champions throughout the lifecycle.

Defining by the requirement as opposed to the software delivery model allows failures to be dealt with prior to them coming to the forefront. If the focus becomes on features, rather then value, then the environment in which we operate in will slow us down.

Quality is not just for the QA team

The journey of transforming your QA team into a world-class engineering team is not as simple as getting your team to undertake some training. Quality should be everyone's accountability so it is truly embedded through the design.

The group delved into the role of quality and where it sat with a team with passion across the board. There was a consensus that quality/accountability was as much of a skill as leadership was. Upskilling existing team members can help bridge the gap between QA and engineering which could create a better career path for all employees. This is turn will create accountability across the whole team, rather than just QA resulting in a situation when if an engineer sees a problem, they will fix it rather than becoming reliant on QA alone.

Reap the benefits with a reimagined workforce

The pandemic has accelerated the rollout of integrating our offshore teams and has started to eliminate some of the cultural challenges of having offshore partners by creating efficiencies through technology.

The group were in agreement that the benefits of offshoring were not just finally being seen on a wider scale but any negatives that were once there around have started to really be broken down.

Having offshore employees has widely been criticised for creating siloed teams who don’t get given sufficient responsibilities and potentially struggling to actually create ’teams’ that can work together, regardless of location. The evolution and acceleration to the ‘future of work’ and the forced nature of a global remote workforce due to the pandemic have broken down barriers and for some organisations, accelerated the rollout of offshore delivery.

Having entire workforces in a remote environment has put everyone on an even playing field and encourage an offshore team to integrate in a more effective manner. This has started to disintegrate the cultural challenges of having teams who don’t get given responsibilities when operating offshore. Rather than it simply being core role and knowledge being kept internal and testing being offshore external, the group opened up about the reimagined workforce actually having created a level platform.

The challenges around communications, time difference and knowledge sharing have been simplified with the evolving world of work and offshoring is paying dividends across the board, with a focus being on creating improvements and efficiencies as the goal.

If you would like to find out more about the benefits an on-demand testing service can bring to your organisation, please contact us today for a no-commitment consultation, PoC, or tool demonstration.