How Much Children Could Earn Charging Parents for IT Help?

Many parents are notoriously out of touch with the digital world, with many asking their children for advice on a daily basis. Prolifics Testing sought to find out how much young people would be pocketing if they charged their parents the freelance fees for the work.

Many parents are notoriously out of touch with the digital world, whilst the younger generations have a far better understanding of many IT tasks. From choosing the right caption on social media to securing their devices, parents are continuously requesting help from their teens when it comes to being online. But how much would these young minds be pocketing if they charged their parents the freelance fees for the work? Intrigued to find out, Prolifics Testing studied the most commonly required help, the hours spent and the typical salary for these roles.

How Much Would Teenage Children Earn For The IT Help They Give Their Parents? 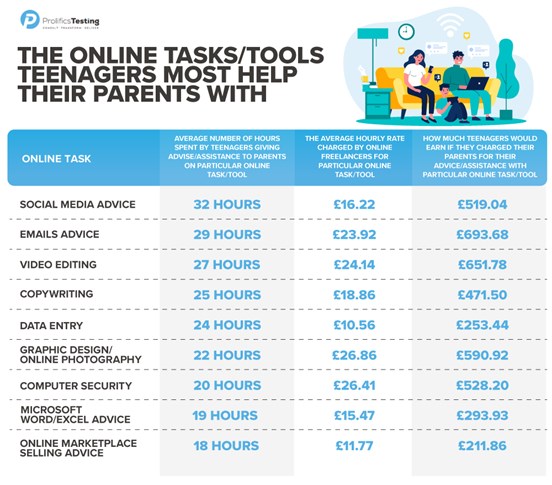 To uncover precisely which IT-based tasks parents were most reliant on their teenagers for, Prolifics Testing surveyed 2,664 teenagers to discover which online tasks their parents ask for help the most with, and how frequently they assist them. These figures were then analysed against the hourly rate for freelancers in the same role, allowing us to calculate how much children would earn if they charged their parents for their IT assistance!

In fact, if teens were to take up a full-time career in social media advice, they would receive an annual salary of roughly £30,785.

Most parents struggle to navigate their emails, with the average teen predicted to spend roughly 29 hours providing email advice to their parents and guardians. With email advice typically charged at £23.92 on average for an hour by freelancers, this leaves teens potentially owed a hefty sum of £693.68 by their parents if they were to charge.

Although all is not lost, because teens that later pursue this as their full-time role could be cashing in on an impressive average salary of £45,400.

Meanwhile, the third most popular IT assistance required by parents was said to be video editing, with an average of 27 hours spent on this task by teens. With video editing priced at around £24.13 per hour among freelancers, teens could have been raking in £651.78 for their editing skills!

However, their skills might later come in handy, with the average full-time salary for a video editor estimated to be £45,817. With figures like these, teens might be at the start of a very lucrative career...

Placing as the fourth most in demand IT help was copywriting, with parents requiring 25 hours of support from their teens when it came to social media captions, YouTube content descriptions and general content writing tasks. With copywriters paid an average hourly salary of £18.86, this left teens missing out on £471.50 for their guidance.

With full-time copywriters on an average annual salary of £35,796, it appears this skill is not only sought after by parents - but in the working world too!

The fifth most in demand IT help among parents, teens spent an average of 24 hours helping their parents with data entry tasks.

Despite the hourly charge for freelance data entry averaging just £10.56, children were still providing their parents with roughly £253 worth of knowledge and guidance -  all of which would earn them an average salary of roughly £20,000 per year if they were to take it up full time.

Despite placing as the sixth most sought after IT support, teens that offered their parents graphic design and photography support would otherwise have made £590.92, with around 22 hours spent supporting their parents in this department and an average salary of £26.86 per hour.

If teens were to later take this up as a full time freelance role, our calculations estimate that they would receive an average annual salary of an impressive £50,980!

With poor IT security having a harsh financial and reputational impact on individuals, it is no surprise that computer security support was also among the help most requested by parents! Our research found that an average of 20 hours is spent by teens teaching and amending security options on their behalf.

With an hourly salary of £26.41 among security freelancers, teens might have been £528 richer if they charged their parents freelance fees for the help!

Microsoft Excel advice was also among the most common IT support sought by parents, with teens estimated to spend 19 hours on these tasks. For this kind of guidance, freelancers charge around £15 per hour, meaning teens would have earned roughly £293.93 in total if they charged their parents for this help.

Meanwhile, teenagers that would later take this up as a career are estimated to earn an average annual salary of £29,363.

Finally, taking up 18 hours of teenagers’ time, parents also required a fair amount of help with online marketplace sales. With the average hourly rate charged by freelancers for this job nearing £12, children could be £211.86 better off had they charged for their knowledge and time!

All of which leaves the average full time salary for such a role at £22,339 per year - a good starting salary for teens.

The best way to learn about a specific piece of technology or online tool is to start with online research. Google the technology/online tool and read a handful of articles to discover the primary elements that form the bases of that technologies/online tools such as key commands. As you go along write them down, so you have different reference points for when you do more in-depth research.

As your research intensities you will undoubtedly have many questions. ‘How do you do that?’ and ‘why is it like that?’ will be natural occurrences in your thought-process and to get the answers to these curiosities utilise YouTube. With many professionals and channels on the video platform dedicated to explaining and teaching key concepts behind some of the biggest technology and online tools, gain the know-how in a quick and digestible format.

The best way to learn new technology or online tools is through practice. Off course have your notes handy from all the theory you have absorbed from various sources but have a play around and don’t be afraid to make mistakes. As you explore, makes notes on any aspects that intimidate you or are completely unsure about. These notes are great for tracking your development and highlighting weaknesses in understanding.

1) Prolifics Testing surveyed 2,664 teenagers to discover the online tasks that their parents most ask them to help with. All teenagers surveyed were within the age range of 13 to 18 years old.

4) Once all hourly charges by the freelancers for each of the given online tasks were found, we multiplied the hourly rate by the amount of time the children spend helping their parents with each online task to show how much they would earn each year if they would charge their parents for the help.

5) In the second graphic (“How much teenagers would earn if the online task/tools they help with was their full-time job”), we multiplied the hourly rate by the average hours worked in a week (36.5 hours) and then multiplied that figure by 52 weeks in a year to get the overall figure for a annual salary if the teenagers specialised in that given online task as a full-time job.